A long period of low oil prices has saved motorists money at the pump, but languishing crude prices could drive up heating bills.

That is because the natural-gas supply is closely connected to oil drilling. Low crude prices have led U.S. oil producers to idle more than a thousand rigs over the past two years, resulting in a big decline in so-called associated gas, a byproduct of oil drilling. This gas typically represents about 40% of total supply, but its production isn’t particularly responsive to gas prices.

Since September 2015, associated-gas production outside the Northeast, the country’s fastest-growing gas-producing region, has fallen by nearly 9%, or about 2.5 billion cubic feet a day, according to energy data firm Platts Analytics Bentek.

That drop-off is enough to fuel roughly 13 million U.S. homes daily, and one reason monthly heating costs are poised to rise. Natural gas heats about half of all U.S. homes while another third are heated by electricity, which is increasingly generated by burning gas, according to the U.S. Energy Information Administration.

The decline in production along with an unusually hot summer has helped to shrink a record gas glut that had been pressuring prices. U.S. gas production in September was about 2.4% lower than a year earlier and down 3.5% from its peak in February, according to Platts.

Natural gas for November delivery on Tuesday closed down 1.2% at $3.2370 per million British thermal units, but prices are up 38.5% for the year and at their highest level since December 2014. 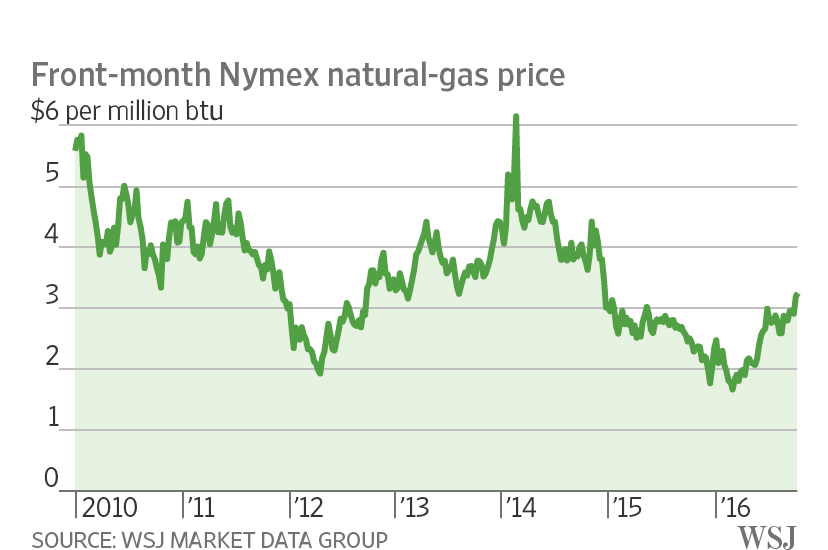 Gas prices have rallied 11.4% this month alone. That is during a time of the year when demand is soft, after air conditioners are powered down and before furnaces are fired up.

Though analysts say prices still could turn lower before heating season begins, Jeff Moore, a Platts Bentek analyst, said he expects it won’t be long before gas prices top $4/MMBTU, or twice the levels of last winter, the warmest on record, when stockpiles swelled.

“That’s not even a bold call in my opinion if we have a cold winter,” he said.

Gas bulls point to the growing number of power producers that have ditched coal and switched to cleaner-burning natural gas, rising volumes of gas that is being exported to Mexico via pipeline and overseas in liquefied form, and forecasts for a frigid winter.

Nicholas Potter, an analyst at Barclays, said he spent this year urging industrial clients who use a lot of gas to lock in prices before they rise. For anyone who hasn’t, it is probably too late, he said.

“We’ve already made our bed for the winter,” Mr. Potter said. “There’s very few things that can happen other than a warmer winter that would prevent higher prices.”

But analysts also point to lower associated gas production as another reason gas prices could rise. Though producers in the Northeast can fairly quickly respond to a jump in prices by opening up wells or finishing those that have been drilled but not completed, the Appalachian region that supplies a growing share of the country’s gas remains plagued by pipeline bottlenecks that make it difficult to move the fuel to market.

Elsewhere in the U.S., gas-drilling activity has essentially slowed to a stop as prices have made many wells uneconomical. There were 94 rigs drilling gas wells in the U.S. last week, half the tally from a year ago and just a sliver of the 1,600 that were running in 2008 when the shale boom was in full throttle and prices were above $10/MMBTU, according to oil-field-services company Baker Hughes Inc.

In some big shale fields where gas is the primary bounty, such as Louisiana’s Haynesville and the Fayetteville in Arkansas, for much of 2016, there hasn’t been a single rig drilling.

“Nobody is drilling for gas right now,” said Matt Stephani, portfolio manager for Cavanal Hill Investment Management, a unit of BOK Financial Corp. that manages $7.4 billion. “Come next spring, we could face shortages.”