Forty-four students from Angola are in Calgary to learn everything they need to know about the oil and gas industry.

The students are in town for a 30-week joint program between Chevron and SAIT to prepare them to work for Chevron back in Africa. However, for the students it’s also an opportunity to push themselves to try new things. 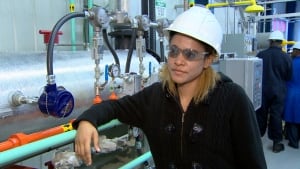 Naice Elisa de Sousa Rio is one of the 44 students from Angola taking part in a oil and gas training program between SAIT and Chevron. (CBC)

“It’s a challenge,” said Naice Elisa de Sousa Rio, who is taking part in the program. “It’s something that helps us grow up professionally and for our professional career it makes us grow up and be on top.”

The SAIT courses include technical training in operations and maintenance, as well as technical English and safety training.

The goal is to give students the best training possible, and officials at the school say it’s paying off.

“Officials in [Angola] are telling us that SAIT is gaining the reputation of being the place to go for oil and gas training,” said Murray Stewart with the MacPhail School of Energy.

After graduation, the students will continue working for Chevron.